In line with previous ponderings about the purpose of Creativity, there’s a more zoomed-out question: how distinctive are the – what I call 3 C’s – Critical Thinking, Curiosity and Creativity? Are they basically the same as some claim, or fully separate phenomena, like others say? Or…

These past few months I have been talking and doing a lot with regards to turning all my thoughts and ideas on creativity into chunks that can be conveyed, e.g. through developing university courses on the topic. This results in conversations with people with a variety of backgrounds. Obviously that is a breeding ground for further evolution in my thinking, so here goes.

One of the interesting discussions that came up was the extent to which something like “Critical thinking” is the same, similar or totally different from “Creativity”. Just to make it all a little more complex, the concept of “Curiosity” can also be drawn into this discussion. Is curiosity more, like I imagine, the driver of the other two, or does it belong to one of them? I will get back to that.

Similarly, one could say that asking questions is by definition part of the Critical thinking-corner, while I really see it as part of being Curious, and to an extent also Creative. For me, if I would have to give some form of concise definitions, these would be:

Creativity = actually coming up with these alternatives, beyond obvious known ones

But if you look for example at the many different definitions of even, say, Critical thinking, let alone Creativity, and the more you actually discuss this stuff, the more the thought creeps in, do these distinctions really matter? Perhaps not. But if you are increasingly engaged in conversations where you are asked to explain the exact difference, there is an incentive to at least give it some thought. Case in point: a few month back a student stated to me “Why should I care about Curiosity, we already are trained in Critical Thinking”.

After many of these discussions, dialogue, own reflection, and playing with the ingredients, for now this is my take on this topic: I see the 3 C’s as somewhat distinguishable ingredients, more on an intuitive than absolute definition level. Much more importantly, I think that in the vast majority of cases, they feed into each other, strengthen each other. Consider it to be not even a Yin-Yang but a Trin-Yang. And it’s not a static relationship, or even equilibrium, it’s a continuing process. In fact, one good visual representation would be a what I would call a Generative (upward) Spiral. 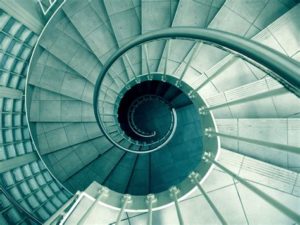 One without the other

All three of them might have some value, if considered separately. But that value would be very limited, in the context of creating change, doing things differently, progress in other words.

Consider this, and please feeeel the points being made, don;t micro-drill them::

As you can see, if unchecked almost all of these initially wonderful concepts can go out of control, move to an extreme. And they will. In real life this mostly does not happen, exactly because the other two are there to make sure of that.

If you would plough through the dozens, perhaps hundreds of definitions and perceptions that float around, the general pattern seems to be that Creativity is fuelled by rejecting popular conventional ideas (= critical thinking) and support new (= curious) fresh ideas (= generative). For me it would be basically impossible to see how someone can be creative without being at all curious, even more so than vice versa. It does seem possible, to be curious (= wonder) without being creative (= wander with aim). Again, that’s more an intuitive stance, but for me reason to choose Curiosity as starting point for creativity instead of the other way around.

So, what is the conclusion?

Does there have to be? Just like for me the picture that I paint above makes sense, for you, and yet others, it may not. This is how I can work with these concepts in a productive way, without endlessly having to discuss what the differences are exactly. The clue is to embrace their complexity: they exist, work and belong together. The real magic lies in their interdependencies, not their isolated perfection.

“The magic lies in interdependencies, not isolated perfection”

(with a global mind)

Learn about my vision, services, profile and examples.

All services can be provided in Dutch or English.